On the fitting day of April 1; the Obama administration loudly proclaimed that about 3% of Americans have opted to enroll in ObamaCare - and that constitutes a resounding success. So resounding in fact, that the President deemed the "debate" over the law's future to be OVER. 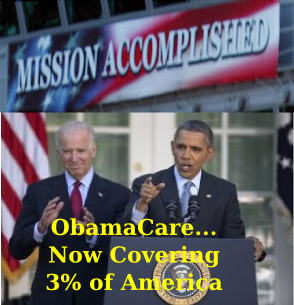 Somewhat predictably, much of the GOP has taken the "numbers bait" and called into question the validity of the WhiteHouse numbers. Yes, some think that the same administration that fabricated a tale of organic Muslim unrest driven by an unseen YouTube post to explain the Benghazi attack - might be "fudging" the numbers.

This is the wrong argument.

The underlying of fundamentals of "ObamaCare" are antithetical to the founding American principles of individual liberty and a Constitutionally limited Government. To divert the discussion to be about the quantity of participants - is to lose the argument about the underlying evils of ObamaCare.

It's as if in lieu of Health Care, the administration decided to solve the issue of Unemployment using the same concept, and passed "ObamaJob" instead.

2. All available jobs would meet the approved "ObamaJob" criteria and be listed on the "ObamaJob" website.

3. All current jobs not meeting the qualifying criteria of a job will be cancelled.

4. A myriad of un-elected boards and commissions will be established to determine what qualifies as a "job." - as the Secretary shall determine.

5. Anyone NOT signing up for an ObamaJob will be fined.

Now, would the ObamaJob opponents then divert their opposition  to dissecting the 7 million number asking:

-How many just switched jobs ?

-How many have actually received pay checks?

-How many were unemployed because ObamaJob caused them to be laid off?

The implication of these questions is that if  the answers to the above were; 0, all, and none; then the ObamaJob law was just fine and dandy - and all that talk about individual liberty, and limited government was just happy talk.

Upon some  reflection, if the opponents to ObamaJob were, Boehner, McConnell, and the increasingly lame Fox News analysts - they'd probably react exactly the same way.

where to buy hgh
back to top