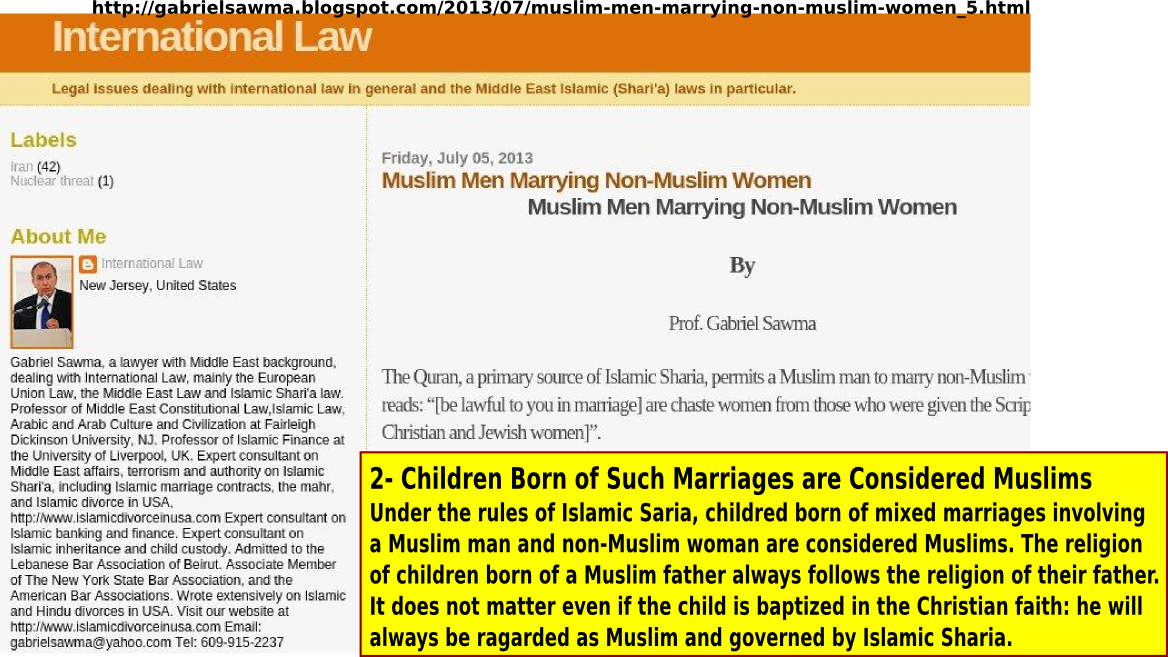 So, Donald Trump did not "correct" a person who described President Obama as a Muslim - and this is supposed to be a controversy of some sort ?

A full 1/7th of the worlds population believe that any child born to a Muslim father IS and will ALWAYS BE a Muslim. Just because I'm not part of that 1/7th, doesn't really make me an authority, nor does it require me to "correct" someone who doesn't share my belief.

Objectively, it's undeniable that Obama was the child of a Muslim father. It's likewise undeniable that well respected practitioners of International Law, such as Professor Sawma shown in the image above, would concur that President Obama is a Muslim.

So why is the media so willing to insult a fundamental aspect of the Islamic faith by demanding Donald Trump publicly denounce it's teachings - by insisting President Obama is a Christian. While the media is anxious to characterize anyone who might suggest the possibility that Obama is a Muslim must be a back-wood, hay-seed, in-bread, toothless, moron - the truth is that there is significant basis for that belief.

I'm not old enough to remember the Kennedy election, but I recall my mother (who considered JFK a Saint) telling me about how ruthlessly the media focused on his Catholic faith, and repeatedly questioned his loyalty to the U.S. because of his religious connection to the Vatican.  Mitt Romney, and his father were constantly questioned about their religious history and how it related to their political beliefs.

The fact that many people are unclear about Obama's faith is largely due to the media having never vetted Obama about how he was born the son of a Muslim father, grew up in a Muslim country, but somewhere along the line became a Christian. This is not Donald Trumps problem, nor is it entirely unreasonable to come to the conclusion that Obama is a Muslim.

I wonder if the media would demand that Trump correct Professor Sawma on his obviously erroneous belief.