Understanding the "Lines Around the States" 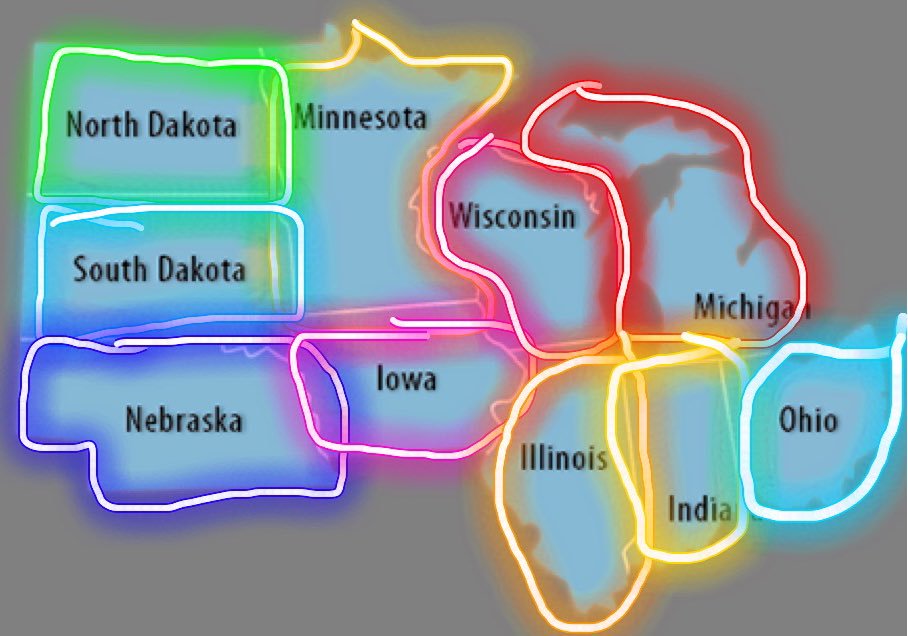 t seems every conservative healthcare insurance plan advocates removing "The Lines Around the States." That is, to allow insurance companies to sell healthcare policies across state lines.

(credit @PeteHegseth for drawing the lines!)

Most people don't understand what is being proposed here. In reality, a quick google search of the top healthcare insurance firms in the US shows that they all sell policies in all 50 States. The issue is that each State has it's own regulatory control over the insurance industry. Other than minor demographic differences, the thing that makes an insurance policy cheaper in New Mexico than Texas is the cost of meeting State regulatory requirements.

In effect, removing "the lines around the states," is nullifying each States ability to establish its own Insurance regulations.

This may not be a bad thing, and it's certainly been done in other areas. States have been denied the right to define marriage and legal residency status - why not healthcare?

The answer is that the question ignores the obvious problem. That is, that regulatory requirements are a major driver of healthcare costs, and IF Federal Law were to demand that a person in New York could buy a healthcare policy that meets the State regulatory requirements of New Mexico, it would almost certainly also prescribe additional Federal requirements that would not only diminish any savings to the person in New York, but would cause an increase for people in New Mexico.

To a great degree, ObmamCare has already done this. Regardless of what is "legal" in a certain state - if a policy doesn't meet the Federal requirements established by ObamaCare, one is subject to a Federal Tax penalty.

Even if one abolishes ObamaCare, and allows healthcare insurance to be sold "across state lines", one needs to understand they are just substituting the regulations of one state for that of another. The point here is that residences of each state are completely capable of petitioning their government to reduce the regulations that drive healthcare costs. Mostly, the extensive list of "mandated" coverages found in most states.

Insurance "Mandates" are effectively a "Tax" by another name. It is the special interest, crony wing of the insurance industry. These are coverages that most people would decline, but the State has determined that any legal policy MUST have. These items range from addiction treatment to sex change operations. Every State effectively tells its citizens that they are too stupid to choose the correct health coverage - and that the State will choose for them. This would be analogous to going grocery shopping and being required to start with a basket full of tofu, sprouts, tampons, condoms, and rogain. When you complained that you don't need ANY of those things and have almost no money left for what you want, the answer would be to ask you to apply for food stamps - because you can't afford to feed yourself.

The "mandate" aspect of insurance creates the environment for special interests to lobby regulators to include their products and services as a mandated benefit. It may be that most folks wouldn't buy insurance for alcoholism re-hab - especially those that don't drink. Doesn't matter, in most States - you buy it anyway - it's the law.

The over riding point here is that to dramatically reduce the cost of healthcare insurance, people of each State can do so by working within their OWN State. If people contact their State Representative, and demand more cost effective regulations or to allow a  "non-compliant" classification of Health Insurance to be sold in their State.

These non-compliant policies would come with a specific warning that they don't meet the State recommended standards, and that they buyer understands the risks. These would be plans that would be reviewed by the State ONLY to meet financial standards - that is, that the Insurance Company has adequately demonstrated the financial capacity to satisfy claims. If such policies were made available, it's likely that buying coverage for ONLY what one believes is needed - would become very cost effective.

In conclusion, it's not "the lines around the States" that make healthcare expansive - it's the "mandates within the States" - that could and should be addressed by every citizen - of every state.