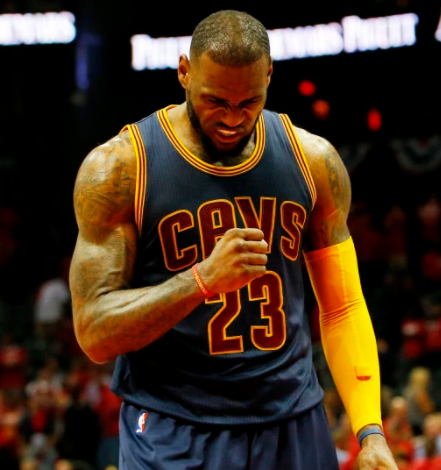 Most likely, they will become the team that got swept in Finals to complete the NBA's only 16-0 playoff winning streak.

But, what if they win?

It would also be part of NBA history. It would either be the single blemish on the Warriors 2017 playoff run, or the first game of 4 game winning streak that shocks the world.

Yes it's unlikely, but lets consider a few facts...

1. NBA teams often perform dramatically differently - sometimes in the same game - for no apparent reason. But certainly in a series. This is one of the things that makes NBA basketball so entertaining. Last year the Spurs CRUSHED the Thunder in the first 2 games of their playoff series. Then the Thunder turned it completely around and dominated the Spurs. No big injuries, no lineup changes.

How can it be?

Pretty simple really. It's all about making shots. Especially 3 point shots. The NBA is where skill meets the "law of averages." No player can shoot a basketball precisely at 3 point distance every time. The highest skilled players CAN shoot in what we call a "tighter pattern." That is, their shots, over a long period of time, will consistently fall closer to the center of the target. Yet, inexplicably, sometimes the shots will fall either "in" or "out" for extended periods.

Kyle Korver didn't have a Warrior within 12 feet when he missed what would have been a game winning 3 point shot. Some defense.

What if the "law of averages" begins to correct itself?

Then the Cavs would start making 3's at well over 40% and the Warriors would be under 30%. If that happens tonight - the Cavs win tonight - and all the talk would be about how the Warriors missed a date with history, but a Warriors Championship is still a foregone conclusion. If it happens again in Game 5, the series will be 3-2 and headed back to Cleveland. Just like that - the talk of dominance and dynasty will be OVER - for at least a couple days. If the Cavs can sink shots in Game 6 and force a Game 7...