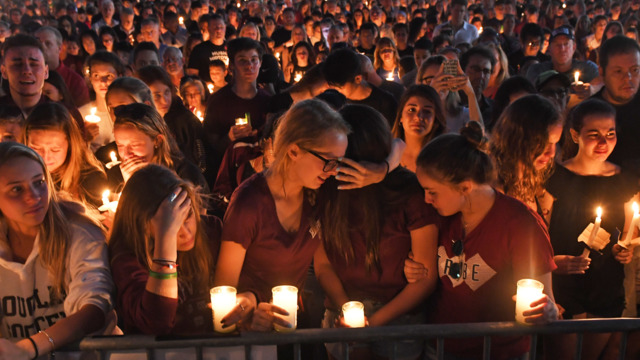 Everything is true today, that was true after the Sandy Hook shooting in 2012. Democrats still LOVE SCHOOL SHOOTINGS, and they still reject any action to make schools safer.

I believe there is one significant change in the calculated political strategy of the Democrats.

Democrats don't really want to ban guns anymore. (Or perhaps they realize that will never be achieved.) Rather, they want to create a collective assumption that there is a simple quick "Legislative Fix"  that will stop school shootings - but that the Republicans oppose it due to their allegiance to NRA campaign donations.

This is, of course, demonstrably false on every count, and could only be contrived and believed by people with serious mental or emotional dysfunction - in other words - Democrats.

This is a perfect mid-term election issue for Democrats. An emotional untruth that can mobilize large numbers of stupid people (ie. the Democrat Base.) The Dems will demand that Congress "Do Something" or "Do Anything," - but if Congress takes the bait and does something like ban slide fire  stocks, or improve State compliance with reporting to NICS - Dems will roundly denounce it as laughably inadequate - and pray for another school shooting to prove them right.

In the mean time, schools will continue to advertise themselves as "gun free" zones and take no meaningful steps to make schools physically or operationally less inviting to demented, twisted, evil people who crave fame via public free fire zones called schools.

That's right. I said it.

Libs LOVE school shootings. They can't wait for the next one. Sure they feel bad for the victims, but they're giddy for the chance to tweak the emotions of an ignorant public with their anti-gun propaganda. They love these school shooting so much they demand that schools at all levels remain Government sanctioned "free fire zones" for all willing psycho lunatics.  Yes. rather than make any serious attempt at "hardening" the school targets against wacko's - they wring their hands and decry that millions of others that pose no threat what so ever also have the same kind of weapon as the last wacko killer. That's because school shooting are the libs "best ammunition" to attempt to disarm America.

Libs hate guns. They hate them more than they hate hydro-carbon fueled cars. Individually owned firearms are the ultimate expression of individualism as opposed to collectivism. By owning a firearm,  an individual is proclaiming his self sufficiency, while simultaneously serving notice to governmental powers that he considers himself to be sovereign. This individual empowerment is wholly incompatible with Liberal collective utopian schemes.

Individual gun ownership, guaranteed by the 2nd Amendment; is the single biggest deterrent to collective tyranny in the world. That's why libs hate it.  They will often remark that in an age of tanks and drones, the concept of armed resistance to military aggression is useless.

They are wrong. They are totally oblivious to the size, scale, and power wielded by private gun own owners in the United States. To show some perspective, the armed private citizens of the United States make up the largest single body of arms in the world. In fact the number of armed Americans is larger than the combined Military, Para-Military, and Reserve Armies in the entire world.  Yes, it's a fact. Combine all the standing armies and their reserve components and they are outnumbered by the number of armed private citizens in the United States.

For those that "doubt it." Here are the facts:

Armies of the World

This massive force serves not only as a safeguard against tyranny; but as a deterrent against invasion.  Still think that armed Civilians couldn't stand up to a heavily armed military? Hopefully we'll never find out. But they could damn sure be employed to fortify schools against psychos.

There are no reasoned or logical arguments to be made against private gun ownership. They have only knee jerk emotional pleas buoyed by shooting victims of a mass shooter. The more and younger the victims - the better for the libs illogical emotional pleas for banning gun ownership.  That's why libs love school  shootings.

The most recent  shootings In NewTown  are a dream come true for socialist libs. Christmas time, high body count, young victims, all shot by a rich white kid in a rich neighborhood . A veritable wet dream for gun hating libs.     The lib media is in full court press. There will be no stopping the endless faux. misery portrayed by media morons as they demand "meaningful" change.

But they won't get it- at least not this time.

Yeah,  they may pass some idiotic "assault weapons" ban, or some "magazine limit": knowing full well that such a ban is nothing but eye candy.  Automatic weapons have been banned for decades. The guns they're banning are functionally identical to many other rifles. They are semi-automatic rifles capable of firing one round, ejecting the cartridge, and  chambering the next round.  That's it. One pull, one shot.

For example, the Ruger 10/22 rife (pictured below) has never been the subject of a proposed "assault gun ban."

The Ruger 10/22 can be had at most local WalMart's for under $200.00. It functions exactly the same as any proposed to be banned "assault weapon.."  Perhaps equally important, is that it will accept several extended magazine clips. For about $25 additional dollars 10/22 owners can pick up one of these:

Yep, a 30 round extended clip. There you go. After "Assault Weapons" are banned; for under $300.00 the next school shooter can walk into the Government approved killing zone with a rifle and three 30 round clips which can be changed in less than two seconds.

The libs are in a one track mode. That is to pass some useless and ineffective anti-gun legislation, while refusing to fortify the soft targets against psycho shooters. After 9/11 people nearly demanded armed marshals on every flight. Soldiers roamed the airports openly carrying REAL automatic weapons. Can't remember a single lib whining about the proliferation of guns.

But when it comes to schools, libs don't want to solve the school shooting problem. They want to disarm America. They can only do that by dramatically changing public opinion on fire arms. They don't have the will, or the might to disarm the public by force. School shootings are their best friend. The more often they can show a scene of senseless carnage with young innocent victims - the better their chance to gain voluntary surrender of gun ownership.

So, look for some stupid legislation; and then wait for the next shooting in the Government Approved Free Fire Zones they call "schools."  Libs will eventually say, "We've tried EVERYTHING else" now we just need to take all the guns. Of course, they'll never try actually "Protecting" schools...

...that would ruin everything.

weight loss drops
back to top