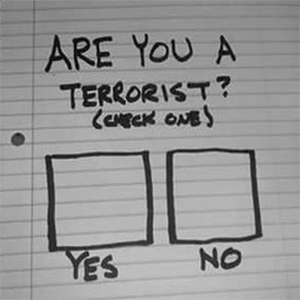 Has it occurred to anyone else that "vetting" Syrian refugees for possible links to anti-American activity is somewhat absurd on it's face. The United States is a declared enemy of the current regime in Syria. Why would we expect the Syrian records - even if they did exist - to contain records that identify people with hostility toward the U.S?

Ted Cruz or Donald Trump are elected President causing Barack Obama to lead throngs of disaffected Democrats to flee the United States and seek refuge in some welcoming country like, perhaps, Iran.

Iranian fundamentalists would protest their acceptance saying that the U.S. refugees are likely to contain significant percentages of people who are hostile to Iran, Islam, and their values.

The Iranian government could respond that they have thoroughly reviewed all of the available records in the enormous U.S. data base of records and found not a single instance of Blasphemy, Homosexual activity, of opposing the Iranian regime.

That would be true. Because none of those things are a crime in the U.S.

What our moron President and his brain dead followers fail to comprehend, is that those opposing mass importation of Syrian Muslims find objectionable is not what crimes they've committed - but the atrocious things that they believe ARE NOT CRIMES.

Those NONE CRIMES include:

-Killing those that insult "The Prophet."

-Honor Killing female children who have been raped.

-Wife beating. (for being disobedient)

Just as those living in an Islamic State would find it laughable that Western refugees would have "No Record of Blasphemy" - it is equally laughable that we are being told that these refugees are thoroughly vetted for anti-western hostilities.