What's Really Going on with the Cavs? 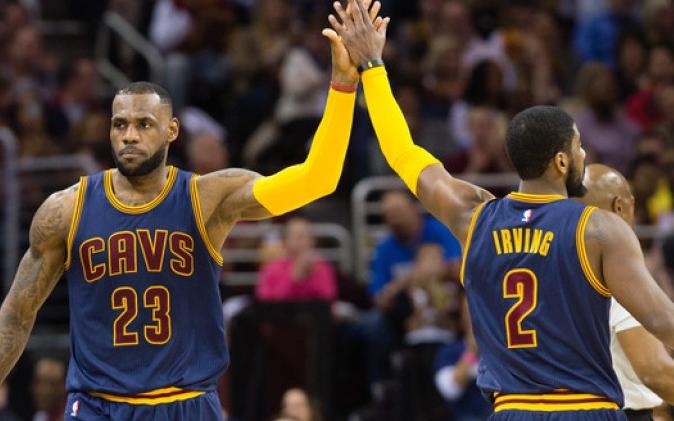 On Saturday the reigning World Champion Cleveland Cavaliers will open their 2017 playoff quest against the Indiana Pacers. Despite what appears to be a deeper and more talented team, the Cavs have rarely looked like champs this year. In fact, in recent days, the Cavs have been a bad basketball team.

The Cavs have been consistently bad on defense. They've had flashes of brilliance on offense, but rarely for 4 quarters. The rotation strategies of Ty Lue seem borderline retarded. While sleep walking through the second half of the season, its mystifying that NO cohesive 2nd unit has been developed. The energetic and promising development of Derrick Williams has stopped cold - he's been totally removed from the rotation. Conversely, the washed up turnover machine Deron Williams seems omni-present. Meanwhile, Lebron James has averaged more minutes than any other player in the NBA.

The team appears to lack discipline. Sunday they not only blew a 26 point 4th quarter lead, but they blew a 5 point lead with 8 SECONDS remaining and POSESSION - and still LOST. They failed to inbound the ball TWICE in the final 8 seconds. It's hard to imagine that such fundamentally poor play will simply vanish when they "lock in" for the playoffs.

It's worth noting that last years team was coached by David Blatt for half the season. He was fired with the Cavs in first place. His rather strict disciplinarian style was said to cause disharmony on the team. Ty Lue came in and morale increased, they finished the season looking like champs.

But this year they've been increasingly sloppy. It's undeniable that the Cavs play like a poorly coached team. Bad defense, no discernible rotation strategy, and poor conditioning. The Cavs seem to be unable to protect a lead of ANY size, several times turning 20+ second quarter leads into nail biting finishes.

I don't know if the Cavs can "flip the switch" for the playoffs. I hope they can. I do think that anything less than an Eastern Conference Championship will result in Ty Lue being deservedly fired.

I've got to add, it won't matter to me. Even though I've lived in Texas for a long time, I grew up in Cleveland. I remember the Cavs first game. I've been a die hard Cleveland sports fan for over 50 years. I was in Cleveland Stadium during "The Drive," I've watched decades of crushing defeats. Lebron and the Cavs became World Champs last year - and that will never change. No matter what happens this year - I can still go to the DVR and watch last years finals over and over.

Unfortunately, it seems the Cavs know that - and might be doing it themselves.

Update 4/20 am: The Cavs remain a mystery. Game 1 vs. Indiana was shaky, Game 2 better - but contained familiar signs of late game collapse. 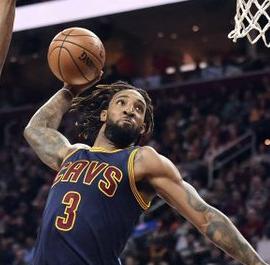 It's still puzzling why Derrick Williams is out of the rotation. Shumpert's energy was a huge lift in Game 2. Derek Williams has energy and size, but isn't the out of control spaz that Shumpert so often becomes. Opponents need to spend way more energy on Derrick Williams than Chaning Frye. Not knocking Frye or Shumpert, they've both been great, But when your team keeps wilting in the 4th quarter - why not a couple of 2 minute appearances from a legitimate "big body" who can wear down an opponent? Seems like a couple of minutes of Edy Tavares could create problems for the Pacers also.

Game 3 tonight will be a good test of the Cavs progress toward regaining Championship form. Indiana will come out hard, knowing that Game 3 is an absolute MUST WIN for the Pacers. In terms of this series - the Cavs can lose this game and not be in serious jeopardy of losing the series.  If the Cavs approach mirrors their season, they'll give a half hearted effort, fire a bunch of three's from the perimeter - and if they don't fall - pack it in.

If they match the Pacers early intensity, challenge at the rim on both ends of the court, and sustain a 48 minute effort - they'll take a huge step toward reaching The 2017 Finals.  If not, I may be back to watching the 2016 DVR finals sooner than hoped.

Update 4/21 pm: "UNbelievable" - that was the text I sent to my sister in Cleveland at the end of last nights game. Not sure any other word fits. The 1st half Cavs were what I feared, and the 2nd half Cavs were what I'd hoped for - and then some.  Lebron was Lebron, and more importantly - Ty Lue did some creative substitution. Kudo's to Lue. Still hoping to see some of Edy Tavares, and Derrick Williams. HINT: How about letting Derrick Williams play the "Lebron position" surrounded by 4 shooters for a couple of minutes while Lebron gets a rest. Could be interesting. Looking forward to Sunday.

Update 5/3 am: Tonight the Cavs will play game 2 against the Raptors. The Cavs played well in game 1. Ty Lue used some creative substitution, and Deron Williams has improved dramatically. This will obviously be a test of will. The Raptors will be under huge pressure to atone for their lackluster performance in Game 1 - but seem emotionally fragile. Even an average performance by the Cabs should be sufficient. One habit the Cavs need to avoid is their propensity to shoot 3's early in the shot clock - after opening a significant lead. Twice in game one, they gave back large leads by missing 3 consecutive 3 point attempts.

One more thing that drives me crazy - The Cavs ALWAYS let their opponent "roll" the inbound pass through the back court, delaying the start of the shot clock. It would only require 1 guy taking 2 steps forward to make the opponent pick up the ball and start the clock. Having watched so many comfortable leads turn into "nail biters," its maddening that they allow their opposition such easy clock management.

Update 5/5 am: Game 2 was, by far, the Cavs best outing this season. Oddly, there is much room for improvement. The Cavs success has largely been a combination of Lebron's dominance and the Raptors inability to deal with the Cavs defensive strategy of quick doubles on DaMar Derozan. The Cavs erratic ball movement and questionable shot selection has been masked by great shooting - which of course, ultimately cures all ills. Shooting contested 3's early in the shot clock isn't fundamentally sound - but when they go in - fundamentals go out the window.

Cavs biggest enemy is complacency. Toronto will come out hard tonight, but the Cavs can easily handle what ever they bring - if they maintain concentration and composure. It will be important for the Cavs to sweep and rest again - as it now appears the Celtics / Wizards will go at least 6 games - and a couple days extra rest would be a huge benefit.

Update 5/22: Yesterday afternoon, I became quite uneasy about the ensuing Game 3 with the Celtics. This was exactly the kind of "trap game" that the Cavs have fallen for during the past two seasons. There was the game last year against the Grizzlies where Memphis sat most of the starters, and the Cavs got blown out by the bench squad. There was the this year where Atlanta started it's bench team, and the Cavs got creamed once again. Sunday's game began to feel the same. The Cavs had blown out the Celtics in Boston twice, and the Celtics best player was out. Nobody seemed to give the Celtics a chance.

This made me so uneasy that I sent out this tweet prior to the game:

Nervous about #Cavs tonight! This is just the kind of game they lose #CavsCeltics

My fears were proven valid earlier than the starting score would indicate. The Cavs demeanor and intensity was totally different from the start. Gone was the lock down D. Ball movement was erratic. Three point shooting replaced driving, and LeBron seemed to consider himself the 4th option. Oddly, the effort in this Game 3 was similar to that of Game 3 against the Pacers - only in that game; the 3 pointers fell in the second half for the Cavs - and the Pacers weren't as good as the Celtics.

In other words - the Cavs went right back to regular season mode. This is the problem with disrespecting the regular season. The Celtics knew that a 21 point deficit could be overcome, because the Cavs made "lead blowing" a trademark of their regular season. Brad Stevens even "guaranteed it" telling his players that if they out worked the Cavs - the Cavs would "let the back in." Stevens was right. The Cavs just let the Celtics back in.

Not just the game. The Series.

The Celtics now have renewed confidence they can beat the Cavs. Hell, during the last 18 minutes the Cavs looked every bit as bad as the Celtics did on Saturday. The Celtics have NO DOUBT they can tie the series on Tuesday - and they can - but only if the Cavs let them.

Update 5/23 Pre-Game: Again, uneasy about tonight's game. All morning NBA radio talked about the Cavs / Warriors finals match-up. Hope the Cavs were'n't listening. Hope the Celtics weren't either. Still not sure why the Cavs played so differently Sunday. Sometimes it seems they only play hard to they prove up their superiority - to themselves. One thing for sure - they'll have to play hard for 4 quarters. The Celtics will think they can overcome any lead the Cavs might build.

And if it comes down to a close game at the end - I sure hope I don't see this: 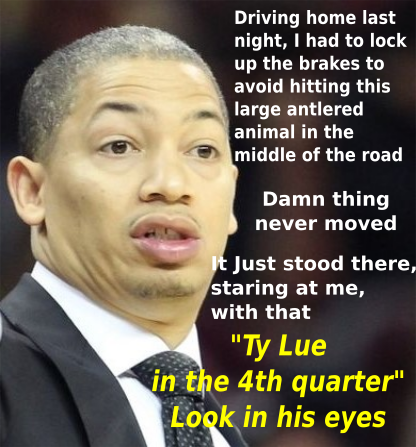 At the start of the NBA Playoffs, many speculated about the Cavs ability to "flip the switch" and rise to an elevated level of play. It's undeniable that they could - and did. What no one speculated about was the Warriors ability to do the same. Unfortunately for the Cavs, they also "flipped the switch" and are playing at a higher level than at any time in the season.

So do the Cavs have any reasonable chance to come back?

No, not really - But could a miracle happen?

Sure. But it's increasingly unlikely if the Cavs don't give up the idea that that "we got to play with pace." This is crazy. The Warriors are built on "Pace." They're all about creating more possessions. The Warriors create more possessions than ANYONE. The Cavs are Champions because they pounded the Warriors into a standstill last year. I swear it seems that the Warriors even bait opponents into running fast breaks, even giving up a few points. The Warriors know that if they can start a "sprint and shoot" contest - they're going to win.

In the final analysis, basketball is ALWAYS about number of possessions and points per possession. If the Cavs have any reasonable chance of avoiding a sweep, they need to do 2 things. Limit possessions, and make 3's at the same level as they did in the rest of the playoffs. The Cavs have missed numerous open 3's. Open looks aren't missed because of the opponents defense (duh-that's why they're open looks), they are often missed because the shooters legs are heavy from sprinting in a ill conceived track meet against a group of gazelles in Warriors uniforms.

Slow it down. Make your 3's. Stretch the season by at least a game...