"Bump Fire" - is a technique where by the gun is held in such a manner that the recoil causes the gun to "bump" another surface - usually a shoulder or thigh. The resulting rebound from the "bump" causes the gun to move forward. If the shooter holds his trigger finger just right, the now forward moving gun will make contact with the stationary trigger finger and cause the gun to fire once again.

This can create a rapid succession of "bumps" and "fires" that can continue until the supply of ammunition is exhausted. For those that remember pin ball - it's not unlike a pinball caught in that sweet spot between the bumper and a boundary creating a succession of rapid fire points..

There are lots of problems with the bump fire "technique."

It's inherently inaccurate. It causes the gun to overheat. It's absurdly expensive. It causes "barrel rise."  I've often considered it the shooters equivalent to a motorcyclists "wheelie."  It takes a good deal of skill and practice, looks really cool, will cost you a fortune to learn, and has almost no practical application.

It is rather difficult for a person with limited use of hands and arms to "bump fire" a weapon. Ironically, the ATF approval, more accurately their acknowledgement that "slide fire stocks" are not a regulated fire arm under the "Gun Control Act" or "The National Fire Arms Act" sees to be based in the fact that they do assist a person of limited mobility to "bump fire" a rifle. (Image of ATF letter below - original linked above) 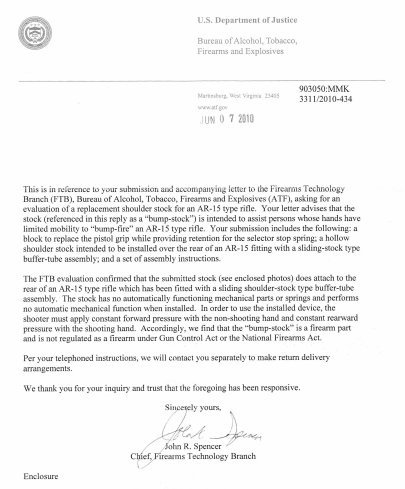 I recall when this was issued, and how almost all those discussing the issue on line were making fun of the ATF for being so beholden to the political correctness of not excluding the disabled from the act of "bump firing" that they couldn't resist approving it. Also, that the people in charge of making such a determination were probably unaware that "bump fire" was the act of creating an extreme rapid fire condition.

In short, the politically correct inclinations of the ATF made it easier for Stephen Paddock to fire hundreds of rounds of lethal gunfire into an unsuspecting crowd of victims.

In coming days, there will be calls for the regulation of "slide fire" or "bump stocks." In the ensuing discussions, it's valuable to understand the underlying background. That is, it was probably mistake based in political correctness that allowed the proliferation of these devices in the first place.