Since early evening on March 3, 2020 every major media outlet that I've seen or heard has been heralding the amazing surge of Joe Biden and / or his "Dominance" of Super Tuesday elections.

Not surprisingly, the Democrat dominated media is reporting what they wish, as opposed to what is.

Yes, Joe Biden got the best of Bernie Sanders on Super Tuesday. No, Joe Biden did NOT DOMINATE. Biden won the Super Tuesday Delegate count by a score of 399 to 322. That's a 55% to 45% win, which amounts to a net gain of 77 delegates in a race that requires 1,991 Delegates to win. State by State totals below: 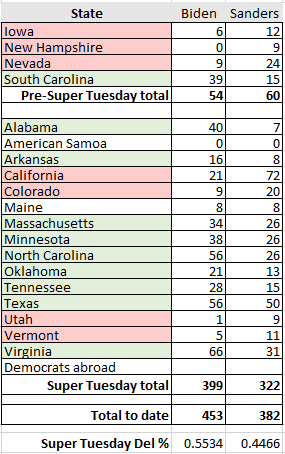 It's probably also worth noting that virtually all of Biden's 77 vote margin was made up from delegate gains in Alabama, Arkansas, Oklahoma, Tennessee, and Texas - 5 States that will almost certainly be won by President Trump in the General Election.

Bottom line - Biden didn't dominate, the race is wide open, and there will probably be many more events that occur before anyone can predict the outcome.