Is Covid-19 the Pandemic that wasn't?

Current "consensus" seems to be that the "Case Fatality Rate" (CFR) of Covid-19 will be about 2%.

During the SARS outbreak of 02 -04, estimates of Case Fatality Rates (CFR) were x3 too low. During the H1N1 outbreak of 09 the CFR estimates were x10 too large. This only illustrates that the "consensus" CFR is almost totally useless, and calls to mind how often the "experts" are wrong. After all, the "experts" all agreed on the presence of WMD in Iraq, processed seed oil's are healthier than butter, eggs will cause heart disease, all natural gas will be depleted by 1980, Gasoline will never be less than $3 / gallon. The list is endless.

Yet we continue to be preached to by "experts" who expound position points that contain little or no basis in fact.

Yesterday the news was headlined with the need for New York City to build more morgues due to the Covid-19 Pandemic.

A city with a population of 9 million people that "normally" has about 420 deaths per day, needs to build new morgues to accommodate the 50 - 60 Covid-19 deaths per day - many of which would have made up the original 420 a day anyway. To believe the "New Morgue" sensationalism, one would have to believe that NYC morgue capacity was already running at 100% capacity, and that there was no possible method of increasing efficiency to handle a temporary 15% spike. This is reminiscent of the lead news stories of the number of body bags reported as ordered prior to the start of both wars in Iraq.

How about some reality. Currently neither the rate of infection, nor the CFR for Covid-19 are extraordinarily alarming. As of Sunday, March 29th the CFR looks like this: 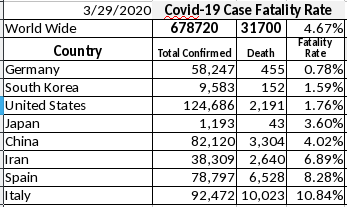 It's difficult to dismiss the fact that the CFR is widely divergent in differing geographic locations. Italy is a definitive outlier. Seems to me that about 2 weeks ago the nearly sainted Dr. Fauci told us "we were 2 weeks behind Italy."

Why weren't we 2 weeks behind Germany, which has experienced a rather high rate of infection - but very low CFR?

Why is it that Japan, a country that had hundreds of fights every day in and out of China for months while the Covid-19 virus was raging in China, has almost no Covid-19 infections, and only 43 fatalities?

Similar statistics for South Korea. Both Japan and South Korea were almost certainly more exposed to the virus at an early stage than Italy.

What would explain the differing results?

Even more importantly, Why is no one asking these questions?

Why aren't we studying what makes Germany, Japan, and South Korea so resistant to Covid-19 rather than shutting down the country and instituting an effective adverse possession of all private sector businesses in America?

For just a bit more context, let's add the overall infection rate to the discussion:

Yes, the world is currently infected at the rate of .0087% of the population. Note that's not 8 percent. That's 87 one thousandths of one percent. ( a number that could be statistically considered 0)  In the U.S. we're infected at the rate of .0381%, that's 38 hundredths of one percent. For a bit of context, the Spanish Flu of 1918 infected about 30% of the world population. Keep in mind that this virus was circulating the globe with no restrictions for at least 60 and probably 90 days before any restrictions were put in place. The Spanish flu infected 30% of the world population in about 18 months in an era when air travel was non-existent.